The NFL and NFLPA will award $1M in up to five grants as the league seeks to know more about the efficacy of cannabis and CBD for pain management.

The National Football League and its Players Association are providing $1 million in funding for research into pain management and cannabinoids through its joint pain management committee, the NFL announced on Tuesday.

The league and union launched the committee last year and said cannabis is included in its research into alternative therapies for pain management.

According to Gangapreneur, “Up to five grants are expected to be awarded by Thanksgiving as the league seeks to learn more about the efficacy of cannabis and CBD and their potential as alternatives to opioids.”

Zelira Therapeutics Ltd (ASX: ZLD, OTCQB: ZLDAF), a company that focuses on the development of clinically validated cannabinoid-based medicines, announces that it has licensed a proprietary cannabinoid formulation to Levin Health Limited (Levin Health) to undertake a clinical trial to test the efficacy of the formulation in treating sports-related chronic pain experienced by retired professional and amateur athletes.

Studies show that retired athletes are more likely to suffer chronic pain and associated conditions such as depression and anxiety due to injuries and physical exertion over long periods.

While clinical data is currently limited, medicinal cannabis may provide a safe and effective targeted treatment option for this large cohort.

The clinical trial to be conducted by Levin Health will address this.

In addition to licensing the proprietary formulation to Levin Health, Zelira and Levin Health have entered into a Project Management Agreement, whereby Levin Health will pay for the trial and engage Zelira to project manage the clinical trial to be undertaken at La Trobe University’s Sport and Exercise Medicine Research Centre in Victoria, Australia.

After several amendments, Morocco’s House of Councilors has finally approved the intensely debated measure on the limited legalization of cannabis.

Morocco’s Parliament put Bill No. 13.21, concerning the commercialization and legal uses of cannabis, up for a vote during today’s governmental plenary session.

It passed by a majority vote, with 41 advisers voting in favor and 11 voting against.

The bill aims to improve Moroccan farmers’ income and give rise to “promising and sustainable” job opportunities in the country’s rural regions.

(Via NORML) Members of the Connecticut state Senate have approved legislation, Senate Bill 1118, to legalize the adult use of marijuana, regulate its commercial retail sales, and tax the potency of THC.

Beginning October 2021, state-registered medical cannabis patients will be permitted to cultivate up to three mature and three immature marijuana plants.

Non-patients must wait until 2023 until they are legally allowed to home-cultivate marijuana for personal use.

Those with past criminal records for activities involving up to four ounces of cannabis will automatically expunge their convictions.

Those with convictions for more serious offenses can petition the courts to take action.

The proposed measure also limits the discriminatory actions that employers, hospitals, and others may take against those who test positive for past cannabis exposure.

The bill also provides protections for parents and tenants who use cannabis in compliance with the law.

It mandates that the odor of marijuana alone cannot be used as a basis for police to search an individual.

It prohibits jail time as a penalty for those under 21 years of age who are caught in possession of marijuana.

Senate lawmakers approved the bill with a 19 to 17 vote.

House lawmakers are expected to consider the proposal shortly.

Lawmakers face a tight deadline of Wednesday, June 9, 2021, at midnight to move SB 1118 through the House and to the Governor’s desk before the legislative session adjourns for the year.

These organizations are contributing to criminal and social justice reform for the cannabis industry.

The recipients include Minorities for Medical Marijuana and United Returning Citizens.

In addition, Hawthorne is funding the NuLeaf Project, an organization that provides direct support for minority cannabis entrepreneurs through a corporate donation.

As North America’s household name in indoor and hydroponic growing supplies, Hawthorne has committed to using its influence and resources to help drive criminal justice reform related to cannabis prohibition and contribute to shaping a more equitable post-prohibition cannabis industry.

“Our commitment to being a good company is what drove us to create The Hawthorne Social Justice Fund within The Scotts Miracle-Gro Foundation. As we announced earlier this year, establishing the fund with an initial investment of $2.5 million to support non-profit organizations with cannabis social justice missions,” said Chris Hagedorn, Executive Vice President and Division President of Hawthorne. “This fund deepens Hawthorne’s commitment to sparking change as policy reform advances across the country and states address the legacy of racial inequity tied to cannabis prohibition. We promise to support programming that helps communities and individuals who have been negatively affected by the long-standing and systemic inequality related to cannabis prohibition in the United States.”

The Hawthorne Social Justice Fund grantees were chosen because of the powerful work they’re doing to address the negative impacts caused by the disproportionate number of cannabis-related arrests and incarcerations involving persons of color to support minority entrepreneurs and increase investments in minority communities.

The work of the Fund’s grantees includes:

Homie: Helping Homeless Youth One Hoodie At A Time

Homie was born in 2015 from a shared passion between three friends eager to break down the stigma associated with homelessness and help young people who found themselves living on the streets.

Homie continues to draw awareness to the faces and stories of everyday youth affected by homelessness and allows them to share their narrative in a dignified way – ultimately destigmatizing and humanizing the issue.

With its recent expansion in the U.S., Homie seeks to continue empowering young people and raising awareness across the globe from Melbourne to Los Angeles.

Homie has designed trendy and comfortable all-season pieces, collaborating with Champion, a household name in hoodies,  to create a new line. 100% of profits go towards achieving their mission of supporting young people affected by homelessness or hardship and help them become their champions.

House of Saka announces the release of Saka Spark Mimosa. 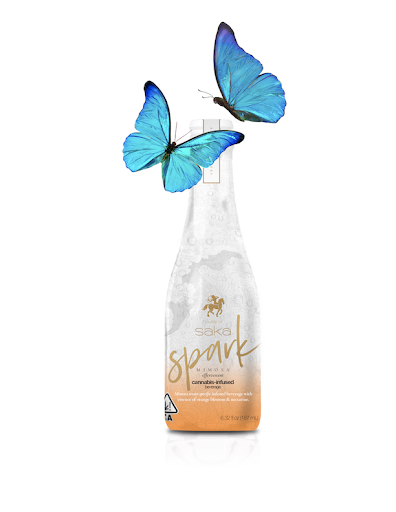 Photo courtesy of House of Saka.

House of Saka Spark ‘Mimosa’ is the first and only cannabis-infused beverage to blend alcohol-removed, premium, California sparkling Chardonnay with the natural essence of orange blossom, nectarine, and a Mimosa-strain specific live resin to bolster its organic cannabis emulsion.

Available in single-serve, 187ml (6 ounces) champagne bottles with a micro-dose of 5mgs of full-spectrum THC per bottle, Saka Spark Mimosa delivers all the flavor and celebration of a traditional Mimosa, without the adverse health effects and excessive calories of alcohol.

Just in time for summer imbibing, Mimosa is available wherever House of Saka Vinfusions™ are sold. 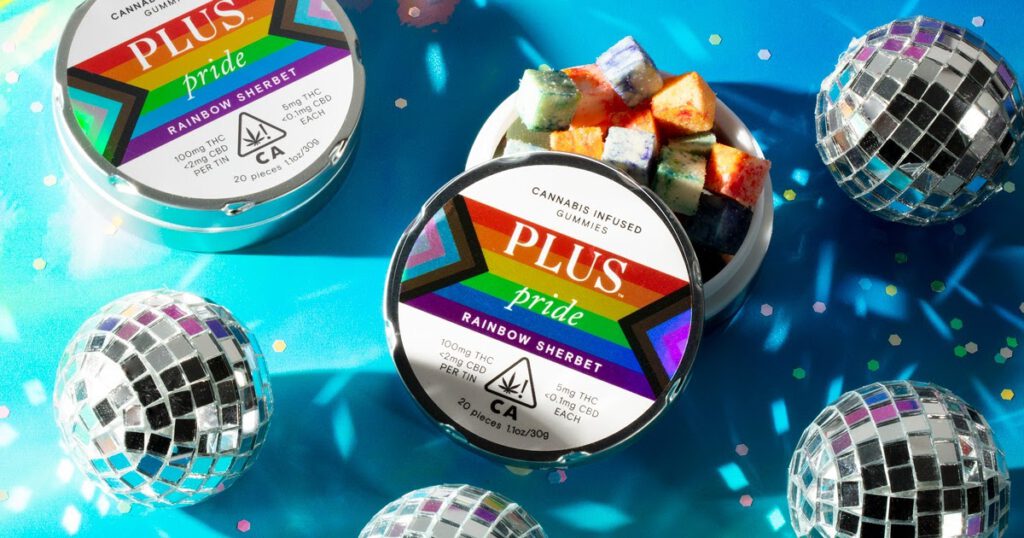 Photo courtesy of PLUS.

PLUS announces the release of a celebratory rainbow-marbled gummy from California’s cannabis cube connoisseurs, featuring a rainbow sherbet flavor and an uplifting Sativa strain.

Ten percent of the proceeds of Plus Pride sales will be donated to the San Francisco-based, Black trans-women led Transgender, Gender-Variant & Intersex Justice Project (TGIJP) to further their mission of ending the human rights abuses committed against Black and Brown TGI people inside of California prisons, jails, detention centers and beyond.

The gummies are $18 and contain 5mg THC. Pride and more varieties are available throughout California.